The K5 Kiosk – Cement Auto-Loading at Its Finest 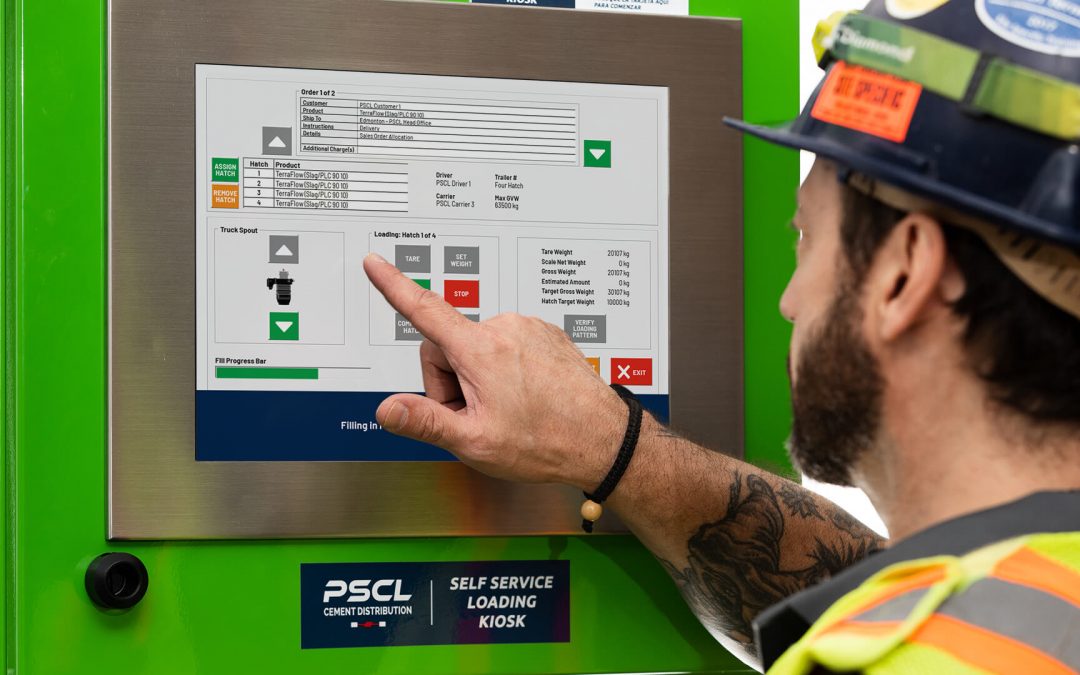 A Short History of the K Program

In the late 1990s, before unattended loading, PSCL had the first version of its loading management software in cement terminals. But the hardware of the era was not designed to stand up to fine, mildly caustic cement dust. A routine software update supplied on floppy disks often required the replacement of the floppy drive which had become hopelessly clogged.

PSCL worked with the industry to create a more rugged system, and in 1998 began with an off-the-shelf sealed steel cabinet with a filtered fan. Inside was an industrial rackmount PC with a standard motherboard. Operation reliability for remote sites dictated a need for data redundancy, and a RAID – unusual for the time – was included. Power was supplied through a UPS. The unit was stored in as quiet and clean as place as the site provided, with a KVM extender to attach a keyboard and monitor closer to the action.

In conversation with company president Matthew Furry: “You really had to work hard to show value when you replaced a simple physical system. In the early days of CDM, we were using industrial computers in unpleasant environments and coming up with ways to add value.”

From there the idea evolved that the driver could load themself, and PSCL’ first kiosk – the K0 – was a step forward from that first hardened computer. “I think the last K0 was replaced just about three weeks ago,” Matthew said recently, a testament to the quality of its construction and the innovation that created it.

“I think the last K0 was replaced just about three weeks ago,” Matthew said recently, a testament to the quality of its construction and the innovation that created it.

The K1 – the first attempt to deliver something with uniformity across different sites – came from building in volume, though there was still a desktop motherboard in it. The K2 was a significant step forward with a fanless industrial PC.

As units were serviced and upgraded, PSCL developed a keen understanding of how their clients worked with the kiosks. The development team decided that standalone units needed to be end-user replaceable. Beginning with the K3 in 2011, PSCL separated all the AC power into a termination cabinet on the bottom and the top cabinet people interact with is only DC, so there’s no license required to service it, no screwdrivers other than the bolts to pull it off the wall and the connectors on the bottom.

Moving into the K4, PSCL looked at the power draw and waste, making sure that the box itself could operate in harsh environments. Solid state media replaced the old, spinning disks, and with more efficient CPUs drawing less power while doing more – generating less heat – it’s possible to have a kiosk that is airtight, taking in no dust which can corrode components.

K5 – The Next Generation

The K4 kiosk became synonymous with driver attended cement loading at terminals and plants. But that wasn’t enough for Matthew. He knew the investment in R&D for the next generation of kiosks would pay off: engineering and manufacturing a custom cabinet, configuring a custom computer, a custom touch screen no one else has. Even down to a gasket that always holds its shape while remaining flexible.

The goal was to improve on PSCL’s already good reputation for reliability – reduce the mean-time between failure (MTBF) – with this kiosk. Many businesses go the other way with lower-priced components to come in at a misleading sticker price. Misleading because while it may be a lower price, the solution performs nowhere near what PSCL can provide, and it comes with an attendant increase in the cost of ownership.

Matthew notes, “A lot of what we’re seeing in our competitors still doesn’t look purpose-built. It looks about the K2 level, where they’re using off-the-shelf components and putting it together. It’s fully functional, of course. I’m sure Craig – PSCL’s VP of Cement Distribution – will have more to say on that.

“Our market understands that when you have a PSCL kiosk that we stand behind it with our warranty and that it’s going to perform reliably for years under the worst conditions.”

“Our market understands that when you have a PSCL kiosk that we stand behind it with our warranty and that it’s going to perform reliably for years under the worst conditions.”

And for all this, the K5 is priced in line with PSCL’s previous kiosks.

In-Depth with the K5 Kiosk

Due to their 24-hour operations, PSCL’s clients demand and require higher reliability. And so the hardware development team began by looking for the most stringent standards that would be applicable to this industry. They settled on the military specification 810G for all products, covering humidity, water and dust ingress, and temperature – both range and thermal shock.

Thermal shock, for example, simulates that you’ve loaded the kiosk in either and extremely cold or warm environment, so the kiosk is subjected to –40° C/F, and then rapidly exposed to high heat..

Other companies are simply meeting more typical commercial standards. PSCL is an international company, and its products are shipped and used globally – from the depths of Canadian winter, to the blistering heat of an Australian summer. Thermal shock matters.

Says VP of Cement Distribution, Craig Leavitt, “Thermal expansion happens very rapidly in a lot of products. If the product doesn’t fail right away, it can introduce a latent fault that’s going to fail later on. Our products have all been designed to meet that. There’s also thermal cycling, that’s where different components expand as the temperature changes normally throughout the day. We’ve done accelerated testing on that as well.

“Our design worked out well. We met 810G, and we decided to see where the limits of the kiosk were. We looked up the highest surface temperature ever recorded on the planet: nearly 57°C/134°F. We added 10° on top of it to simulate full sunshine, and the K5 would still be able to load cement.

“On the low temperature side, we reached -37°C/-35°F. We only needed to meet -30, but we didn’t feel that –37 was enough, so we added a bezel heater to the monitor, which was the only component that was getting sluggish. We went back and redesigned, and we’re close to -50 now on the monitor. It’s certainly colder than anybody would need to be pouring at.

“With each spec, we went above and beyond anything that we thought could ever be encountered in the cement industry. Another example: our kiosks can withstand an industrial pressure washer, just in case somebody decided it would be a good idea to pressure wash a touch-screen PC device.”

“With each spec, we went above and beyond anything that we thought could ever be encountered in the cement industry.”

Even a testing error drove the team to make improvements. “A partial vacuum test uses small particles – smaller than actual cement – to simulate dust getting in the cabinet. The vacuum attempts to suck the dust into the kiosk, not simply allowing dust to settle on the kiosk like it does in the field. The testing lab’s pressure gauge – instead of pulling 150 pounds over the surface of the door – pulled a hard vacuum, exerting 6,000 pounds of force on the door.

“The monitor cracked because of the resulting deformation in the door. The kiosk still worked fine. Even then it didn’t draw dust inside. We went back and we assumed that the testing data was correct, and we reinforced the door to be able to withstand what we thought was a typical result. When we found out the truth later, we decided we would stay with the new door design. Our kiosks are extremely robust.”

With that level of performance, we made the comment that NASA would have to come to PSCL for a cement-loading solution on the Moon.

“Yes, NASA would have to come to us,” he says without a hint of a smile.

When asked about where the competition is at, Craig confirms Matthew’s earlier comments.

“Our competitors are still using sun shades on their kiosk. Sunshades are a major complaint from customers because they get ripped or torn off.  Our kiosks don’t require a sunshade. With the brightest monitor in the industry, our kiosks are directly readable in the sunlight without a sunshade, and they’re impact resistant. We also work with many different types of mounting hardware, all of it engineered to keep the driver in the truck. Our kiosk will work longer in all conditions for you than any other kiosk out there on the market.

“We also chose a high-visibility green for the cabinet that the drivers can identify right away, that’s easily identifiable of where they need to go to interact with the kiosk. And it ties in directly with the Follow the Green design of our software.

“By investing in the R&D up front and listening to our customers’ needs, we’ve avoided having to tack on fixes later. We cost a little more up front, but our cost of ownership is considerably lower. Everyone at PSCL, everyone on my team, we stay focussed on what will serve our clients best.”

To see how the K5 fits into our Self-Service Loading workflow, visit the SSL page.

Look for a future article on the K5 where we examine the evolution of PSCL’s software.

We are a dynamic, growing company with dozens of professions and skill sets. Is there a topic or story you’d like to see PSCL cover? Let us know. The more we know about what each of us does, the more effective we become.